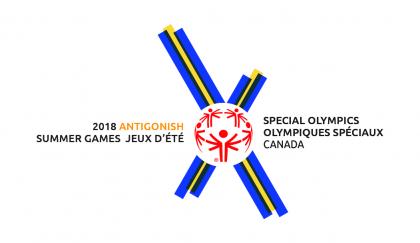 I’ve pulled this together mostly from the posts from the Owen Sound Special Olympics Facebook page for viewing convenience.
[Click on smaller images for full size] 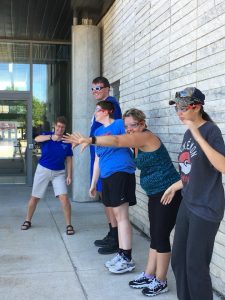 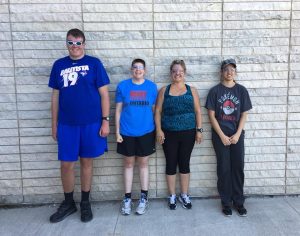 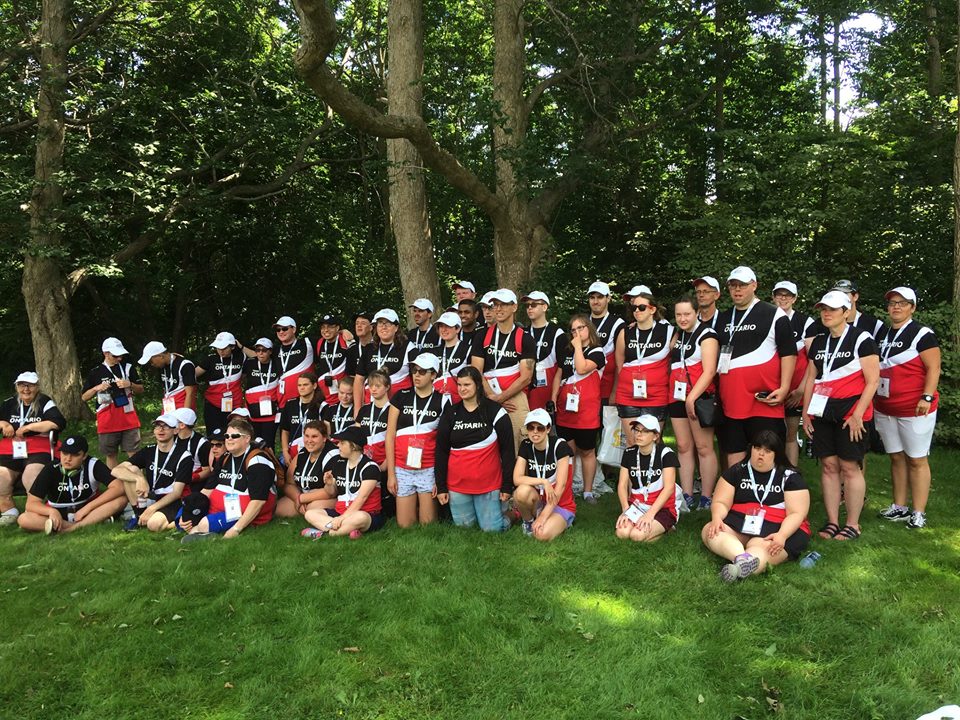 Congratulations to AJ Brand for her silver and gold medals 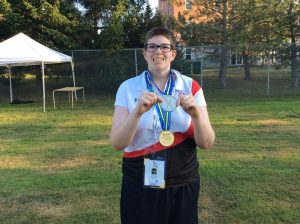 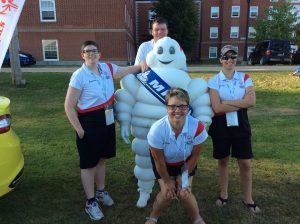 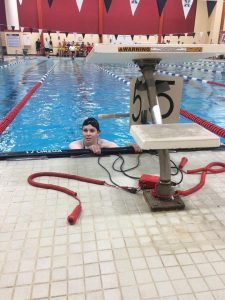 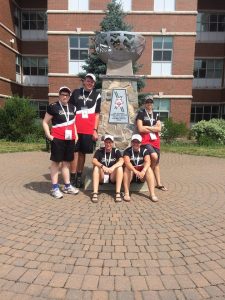 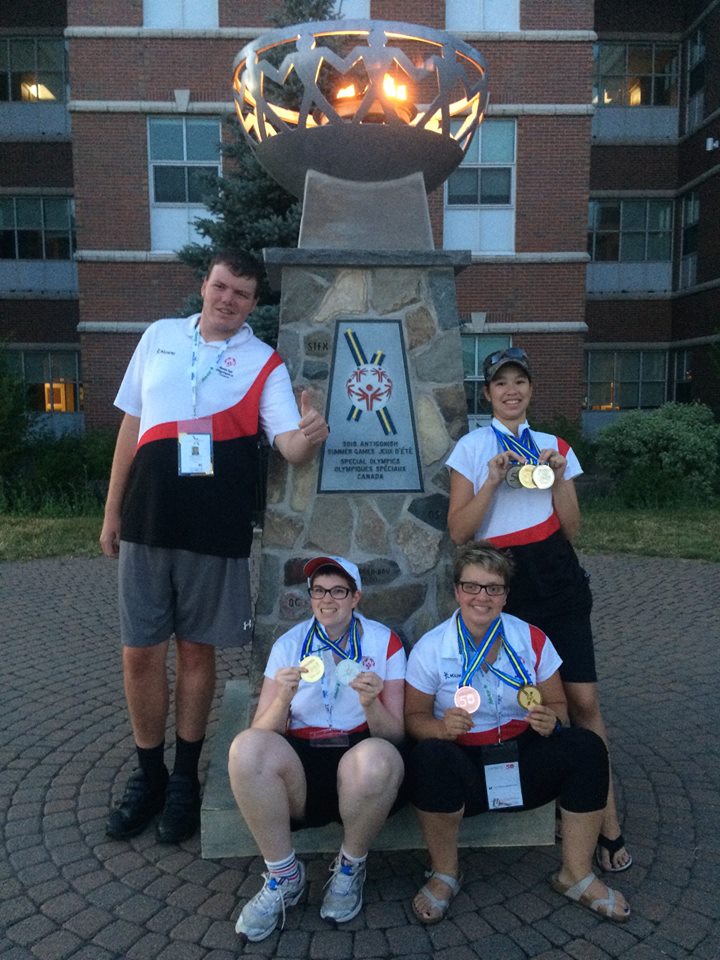 An exhausting couple of days watching AJ compete via Live Stream … she managed to beat her qualifying times in all 4 events; way to go, AJ 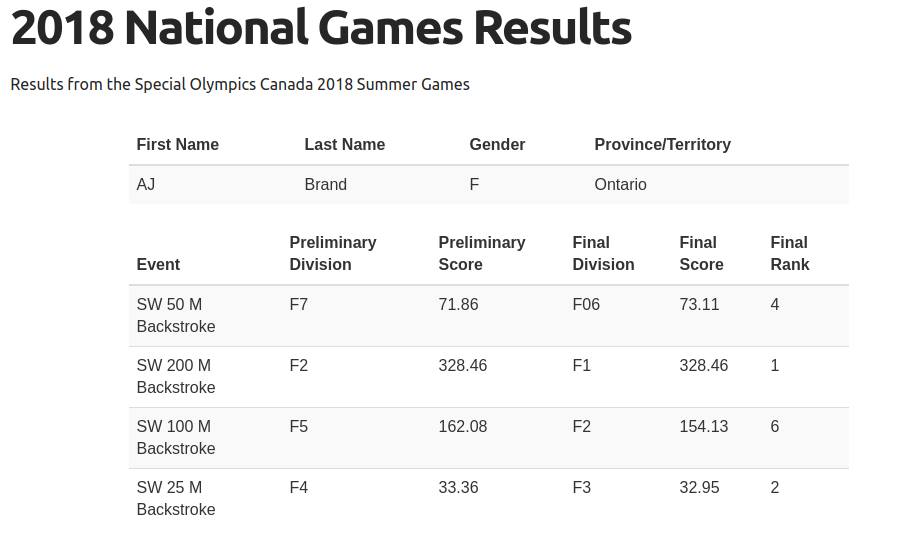 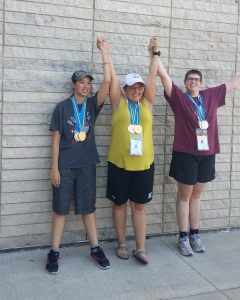 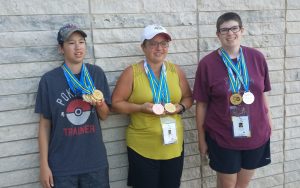 [ AJ didn’t get chance to polish this memory|report in the few days after recovering from the trip and setting off for three weeks at Belwood Lodge and Camp. Since she’s only got a week when she gets back from camp before heading back to Georgian College, I thought I’d better publish it as is … ]

We boarded the plane in Toronto at 8 am. On the way to Halifax the plane let us watch a free movie. I looked through the selections and picked the first Harry Potter.

We arrived at the airport 2 hours later and boarded the bus to Antigonish. We arrived in Antigonish at three and went to our rooms for some downtime. Shortly afterwards we were called for dinner. We walked up a big staircase and headed over. When we got there the line was so big that it ended outside. When we got in we looked around and saw huge pans with several options for dinner. Once we got to dinner, the only spot available was a tall table at the back which became our favourite table because Jon had tons more leg room and also it wasn’t as crowded which made dinner conversations much easier. We returned to our rooms and had a nice relaxing time and at 9 we headed to bed.

Tuesday was the first time we got to experience the pool. My first event was 200 metre Backstroke – I hopped into the pool after hearing the whistles. I was shocked by the three whistles because in other competitions in Ontario it is one whistle, on your mark, beep. I got back into game and got ready to pull up so I had a good take off. I heard the beep and threw my self backwards and started hard and got to the wall the first time did a flip turn and took off at full speed. The only thing I could hear was the sound of the water splashing as I touched the wall for the 8th time and realized I touched the wall first.

I was immediately called back in for my 25 metre and as I waited for my heat I began to visualize my swim. We got called to get in the water took off and someone soared by me I started kicking harder and managed to touch the wall second. By the time I was called back for the third time I got back ready to throw my self backward and started to swim hard I had been upgraded to another heat which was tough competition because everyone was several seconds faster so I didn’t stand a chance but I didn’t give up I swam faster than I ever had before and touched. We were called out of the pool and headed upstairs to cheer for the other athletes. One of the athletes from my hometown told me that I just flew. I cheered as loud as possible for the Other athletes. I felt extremely weird yelling at first but the race was so close that I couldn’t resist the urge to yell as loud as possible as my friends went flying in the water it was just so great.

Near the end we got to explore off campus. The atmosphere of Antigonish was spectacular there were several people that stopped to talk to us about our races and our accomplishments. We managed to have time to go watch other sports for a bit. We watched basketball, track and rhythmic gymnastics. it was so cool to be able to experience watching other sports and not having to be sitting on the pool deck for hours.

The friendliness of everyone in Antigonish lifted our spirits which made us all swim in record times. To celebrate our accomplishments we took pictures with the cauldron while it was lit, and for the last time we took a picture when the games were finished when the flame was out. Which was so cool to see and also somewhat sad at the end because it meant that it was over. But also good because it meant that we could go home and catch up on our sleep.

” I have met tons of new friends and I have had an exceptional experience at Special Olympic National Games. It has been a spectacular competition.” – AJ Brand

“Seeing the excitement and efforts of other athletes, being able to be a part of this wonderful event is more than thrilling, plus yes the challenge to win my own medals.” – Jamie-lee Ward