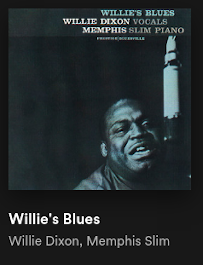 Willie Dixon’s debut album gives us two blues masters throwing out some tunes in the studio “during a two-hour recording span, in between flights” – magic!

“It is unlike all other albums by Dixon, as he and Slim are accompanied, not by the usual crew of Chicago blues players, but by a group of New York mainstream jazzmen, including tenor saxophonist Hal Ashby, guitarist Wally Richardson, and drummer Gus Johnson.”