Album of the Day: Alexis Korner’s Blues Incorporated – R&B from the Marquee (1962) 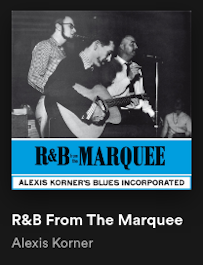 Studio-recorded in June, this 1962 album’s title celebrates the Marquee Club which was THE venue for R&B and blues music in London from 1958. I can remember sneaking into 165 Oxford St. when I was 15, around when this was recorded.

Alexis Korner was a founding father of British blues.

From the original sleeve notes: “The strength and vigour of R&B cannot be denied, and in the field of popular music they are qualities which have been lacking for too long. To an entire generation of young people weaned on diluted rock and roll, the sincerity and force of Rhythm and Blues have an inevitable attraction.”

“rough, virile, driving music”
– Stevie King [LINK]
(well worth a read for the full original sleeve notes, plus a detailed description of each track.)